TOP Server's device-level auto-demotion settings (sometimes referred to as slow polling) allow a driver to temporarily place a device off-scan in the event that a device is not responding. By placing a non-responsive device off-line, the driver can continue to optimize its communications with other devices on the same channel by stopping communications with the non-responsive device for a specific time period.

After the specific time period has been reached, the driver will re-attempt to communicate with the non-responsive device. If the device is now responsive, the device will be placed on-scan; otherwise it will restart its off-scan time period.

Devices on different channels will have a limited effect on communications due to the multi-threaded nature of the TOP Server. See Multiple connections for more information on this feature.

Slow and unreliable networks can be mitigated using auto-demotion

Auto-demotion is most frequently required for telemetry applications where remote serial and radio networks can negatively impact communications.  Removing an unresponsive remote device from the polling cycle of a channel greatly reduces the interruption of polling to the remaining devices on the channel that are responsive.

Coupled with configurable request timeouts and other timing related settings, auto-demotion provides the ability to fine-tune your communications on such systems. 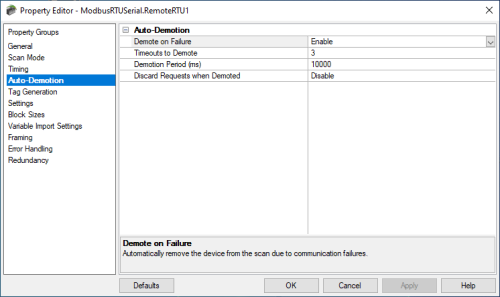